Multiple menus to choose from. Each drag-n-drop customizable.

Our Next Generation Has Arrived

Want To Try It Out?

MORE REMOTE GUESTS IN YOUR PRODUCTIONS

The next generation of LiveToAir comes in two new versions supporting either six or twelve remote guest channels.  LiveToAir has always delivered an efficient, intuitive workflow, and these new versions carry on that tradition.

When guests initially connect to LiveToAir, they start out Off-Air in a virtual Green Room. From there, they can get prepped by a producer and coordinate with the other Off-Air Guests before they go live. When everyone is ready, they can all be switched On-Air where their video and audio will be pushed into your production switcher and audio mixer, and they will start receiving a live return feed from your studio.

Raising the number of channels is just one of many major enhancements found in these new versions.

Read on to find out more.

When it comes to routing video in to and out of your production, LiveToAir | 6 and | 12 were designed to give you as much flexibility as possible. The system supports both NDI and SDI inputs and outputs, allowing you to use a mixture of the two throughout the Software (including the ability to send out Guests through both simultaneously if needed.) In addition, the resolution of each video feed can be set independently as well. 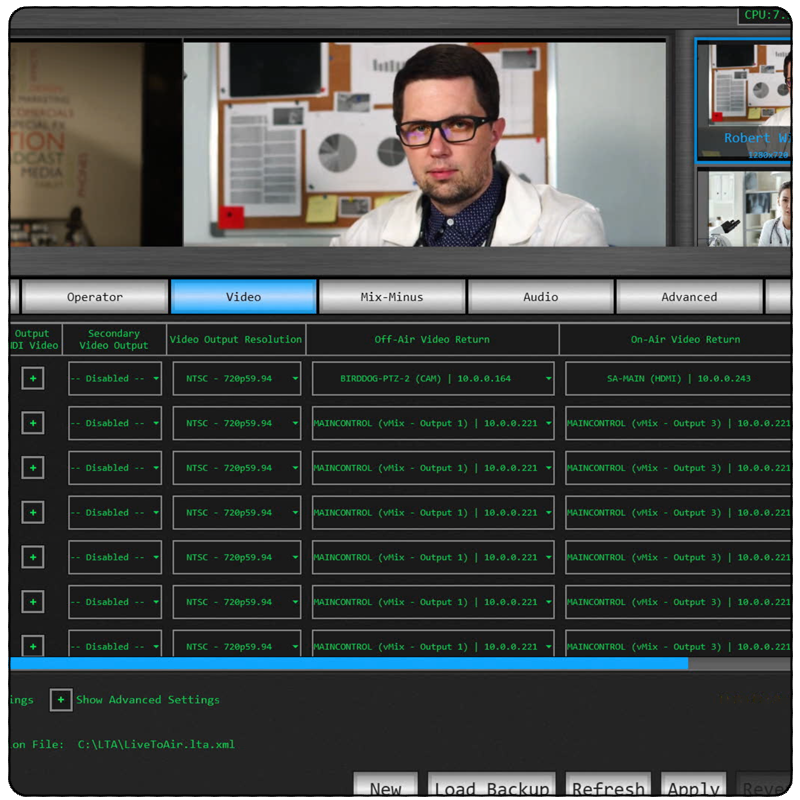 LiveToAir also has an internal software distribution amplifier which enables you to route return videos to any number of Guests – ranging from a single return video for all Guests, all the way to a distinct return for each Guest in their Off-Air and On-Air states (Up to 24 returns in LiveToAir | 12).

In addition to high-quality software encoding and decoding, LiveToAir supports Nvidia’s NVENC and NVDEC for hardware-based encoding and decoding. This can be configured for each Guest channel independently –  and across multiple GPUs - allowing you to spread the load as needed on whatever system you are running LiveToAir on. Properly tuned, even lower-end systems can be used to host LiveToAir.

A key feature we have introduced in this new version of  LiveToAir is the ability to output Guest video when Off-Air. When combined with our flexible audio routing capabilities, this now allows you to create custom Green Rooms in external software like vMix or OBS.  You can use these platforms to create a custom virtual space (with your own layout and branding) and route the output back into LiveToAir as the Off-Air return video feed. When configured this way, switching guests Off-Air will place them into the Green Room, and switching them On-Air will place them back in the studio - all with the press of a single button.

While  still providing for simple ways to configure your audio, the new LiveToAir | 6 and | 12 are able to support complex audio routing with dynamic mix-minus setups. They support audio over NDI, SDI, and WDM  (including Dante in WDM mode), allowing you to use a mixture of all three throughout the software.  If needed, it is even possible to send out each Guest’s audio through both NDI and either SDI or WDM simultaneously. 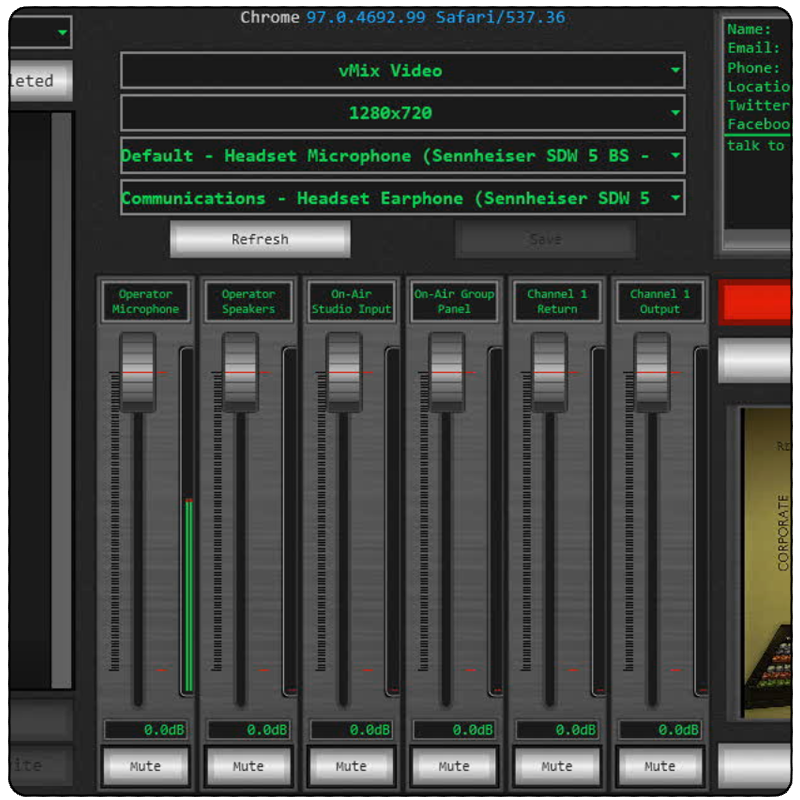 LiveToAir’s internal distribution amplifier also functions with audio – covering you if you need to send a single audio return to all guests (One Return), or even distinct return audio for each Guest’s “Off-Air” and “On-Air” states (Up to 24 total returns in LiveToAir | 12).

One of LiveToAir’s biggest strengths with audio is its ability to easily configure multiple Mix-Minus Groups for the Off-Air and On-Air states of each Guest channel. A Mix-Minus Group tells LiveToAir to generate an automatic mix-minus with all other Guest channels in the same group, and to not include the Guest audio from those outside the group. This capability can greatly simplify the setup needed on your external mixer.

The flexibility offered by LiveToAir translates in many creative possibilities. For example, in LiveToAir | 12 you could have the first four Guest Channels in one mix-minus group when they are Off-Air, the next four in a second, and the final four in a third, but assign everyone to a single mix-minus group when they are On-Air.  When these guests are set Off-Air they will effectively be in three separate Break-Out Rooms, but when switched On-Air they will come together to interact as a single group. When combined with the advanced video routing capabilities now available in LiveToAir, very sophisticated virtual spaces can be created to support this as well.

To help streamline your remote guest workflow during complex productions, LiveToAir now offers a full macro automation system with a robust HTTP interface for both control and status feedback.

Compatible with both Central Control and BitFocus Companion, you now have the ability to map complex multistep operations to a single physical keypress on a Stream Deck or xKeys. You can even use controllers like the Behringer X-Touch to adjust LiveToAir's audio output levels using physical sliders.

Between advanced macro control and support for physical control surfaces, working with remote talent has never been easier.

Having dynamic, non-verbal ways to interact with your remote guests can add a new dimension to your productions. You can easily get a "Show of hands" or take a snap poll as interesting topics come up in a discussion. 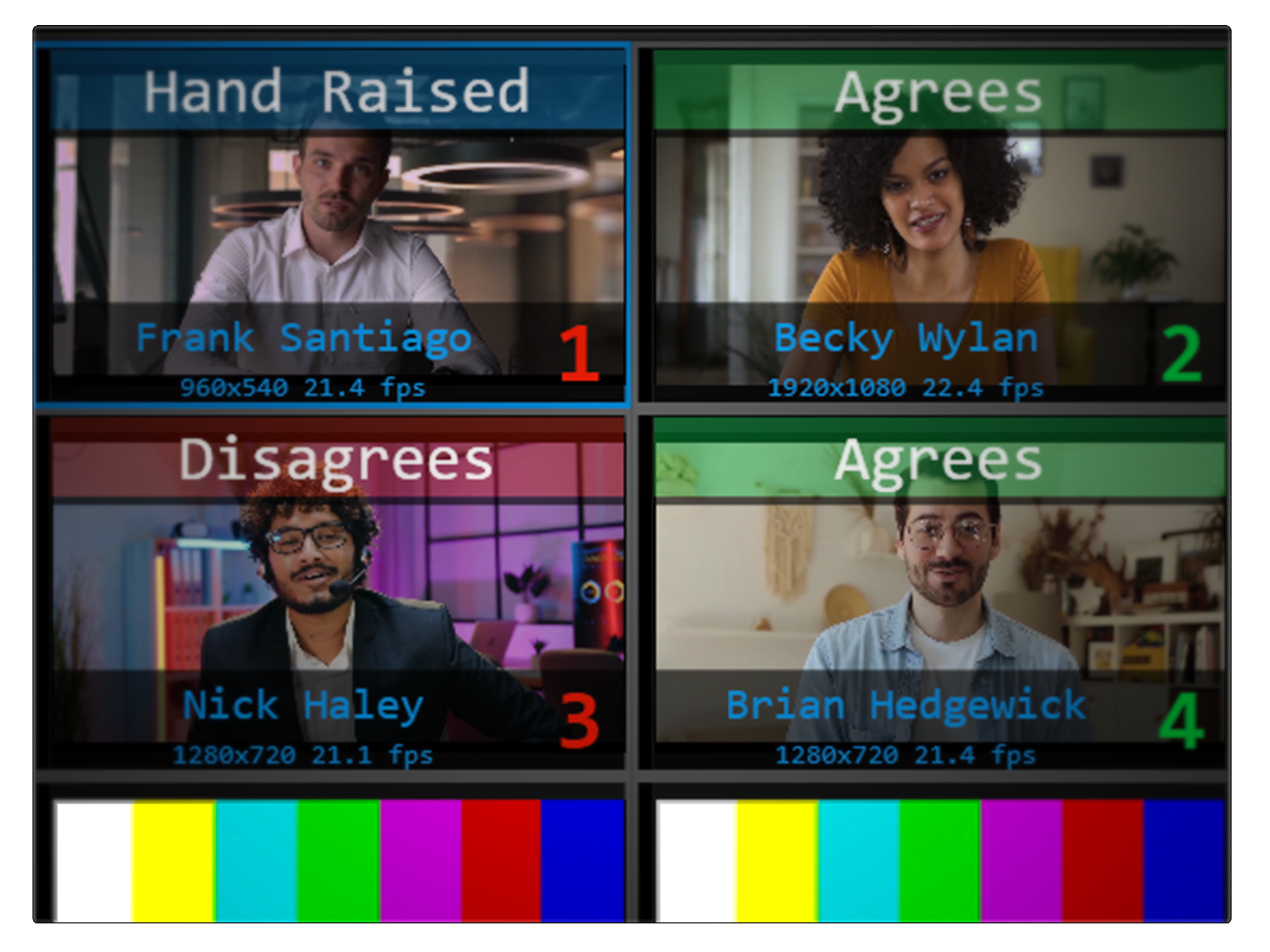 In addition to having visual indicators display on each guest channel in the LiveToAir interface, all guest interactions are also written out to an XML-based channel state metadata file. This makes these interactions available for generating on-screen graphics, triggering various automation presets, or even to feed processing through external scripts.

This type of interactive feedback can let you better manage the flow of large group discussions, and help balance the perspectives that get shared.

Are You Still working with the
previous LiveToAir version? 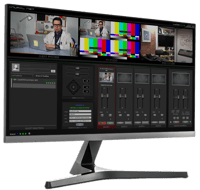 While we no longer sell our previous four channel version of LiveToAir QUAD, all of our existing LiveToAir customers will receive a free upgrade to LiveToAir | 6 - a way we can say "Thank You" for the support you have shown us.

We'll be reaching out to everyone soon with details about how to download this new update for your software.